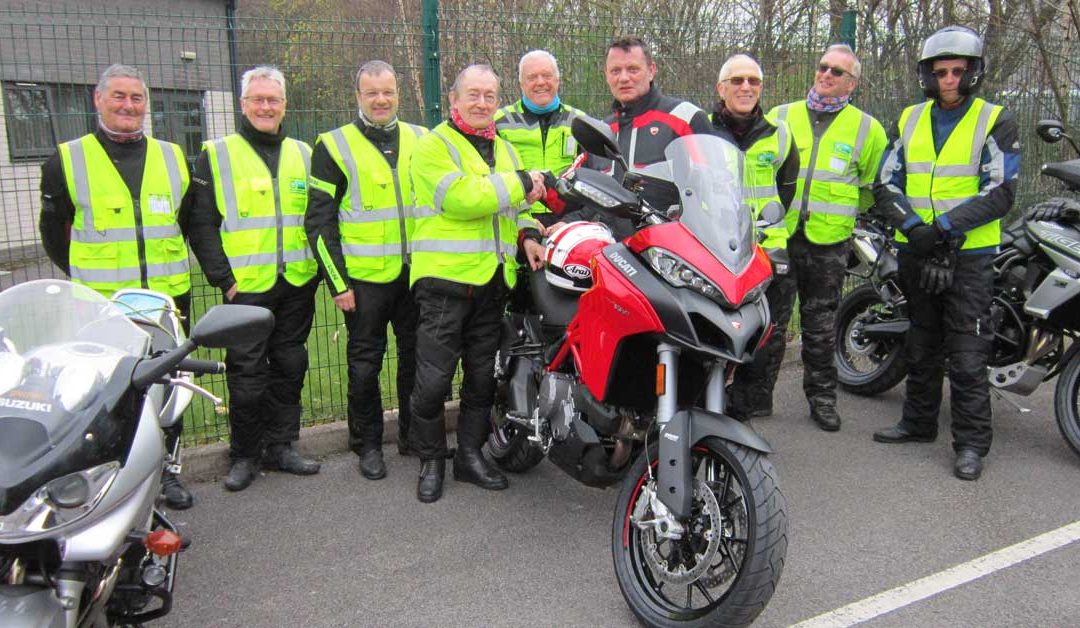 I passed my motorcycle test back in 1993 and purchased my first road bike, a brand new Kawasaki KR1S 2 stroke race replica. Looking back now I consider myself to be; a) lucky to still be here to write this and b) extremely grateful I don’t need a full time knee/back surgeon. But the little Kawasaki ignited a spark that 26 years on still glows strong! I fully immersed myself into motorcycling in all forms, including track days, off road trials and enduro riding and more recently European touring trips.

I consider myself to be an average rider, in that I was never the first to arrive at Devil’s Bridge, probably because I think I have a good sense of my limits and have never been prepared to ride out of what, I consider to be safe on the road. That’s not to say, like everyone else I don’t enjoy getting a shift on when conditions and roads allow. In 2011 I started my career with Ducati Manchester and all my planets aligned! I consider myself to be extremely lucky in that my passion/hobby became my full time career. I started a Wednesday evening ride out from Ducati Manchester, which involved escorting customers up to Devil’s Bridge, Matlock Bath etc. It opened my eyes to the massive difference in riders’ ability which, when coupled with a large group, meant I had to become very diplomatic in my suggestions on how my fellow riders could become safer riders.

In 2018 I met David Raymonde, who over time became not only a Ducati customer but also a friend. David mentioned (on more than one occasion lol), how he would love to invite me along to Bury & Rochdale IAM (BRAM) for a taster session. As I’m always busy (3 teenage boys, busy life & even busier job, naturally I ignored him) sorry David………..Luckily for me, David persisted over a period of months and he managed to catch me at a very busy time when to be honest (and I’ve never admitted this to David – but as he’s my pal now he won’t mind) I said yes, just so he would shut up and bugger off lol!

So the commitment was made and on a COLD Sunday in April I went along to Bury Fire station for 8.30 am on a Sunday morning. For those of you who know the BRAM Group you will have spotted my mistake as the group doesn’t actually meet until 9.30 am.…..But that wasn’t an issue as I met and had a chat with Harry, who turned out to be one of the most genuine and interesting people I’ve ever met (as well as the Chief Bike Observer of BRAM)!

Harry explained all about the IAM RoadSmart course, what to expect, rules and do’s and don’ts. We did a pre ride check on my brand new 22 miles Ducati Multistrada 950 and off we went. I rode as I would normally ride, stuck to the speed limits and had a 2 hour assessment ride. Half an hour in Harry signalled me to pull in and we had a brief chat about my riding, Harry asked me if I was riding any differently to my normal style, I explained that I was riding as if he wasn’t there and was enjoying myself – I got a brilliant remark from Harry when he stated “actually Martin, you’re pretty good and it won’t take much to get you to test standard”!

Now considering I’ve not had any training in my previous 26 years of riding, this was a huge thing for me and I will never forget Harry’s chat that day – thank you Harry, you sir, are a legend! We had a debrief over a brew and Harry signed me up for the full course. It was difficult for me to commit to every Sunday, due to my boy’s motocross events and other things I’d committed to. The BRAM branch is fantastic in that they understood this, so I commenced Sunday morning rides as and when I could fit them in. I had some fabulous rides with some genuine great people (Steve, Harry, Alan and David). It amazed me that these genuine people give so much voluntarily with their time and commitment and I will be forever grateful to them – thanks guys! 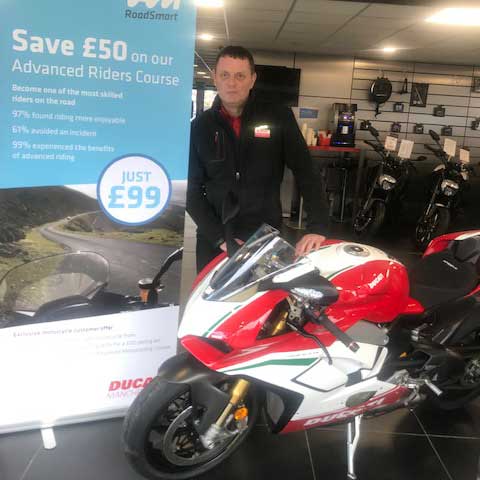 So after 5 rides my standard was considered to be good enough to be put forward for the test!!! – I will be honest and admit that I didn’t tell anyone of the test date in case the worst happened and I failed ….

So test day came and I met my examiner in Hyde for a brew and an insight into what to expect, we did our pre-ride checks and off we went! I rode over some great roads being the Snake Pass over Holme Moss etc. I rode exactly how I had been instructed, following every little tip and advice given. I will admit to being extremely nervous when we arrived back but my examiner told me right away I had passed!!!!!! – Not only had I passed, but he explained I had passed with a distinction! – I’ve never passed any exam with a distinction before, so you can imagine I was extremely happy and pleased with myself!

I immediately called David and he shared my joy at being passed with a distinction called a F1RST!

So what could we do now I asked myself? With the help of BRAM and the Manchester500 Group we ran a taster session at Ducati Manchester and had 10 instructors take 10 Ducati riders out for an Assessment session.

This resulted in 6 Ducati riders signing up for the course to date and I’m proud to inform you we now have IAM RoadSmart signs / banners / leaflets etc. instore at Ducati Manchester and we offer customers a free taster session or course with purchases of Ducati motorcycles!

What next for me? I have been asked to consider training as an Observer and am also considering going on to train and take a Masters qualification, which is the highest possible level that can be achieved at IAM RoadSmart. Time will tell if I can follow either or both of these options.

Hopefully my positive experience will encourage more people to go along and try the IAM RoadSmart Advanced Rider Course. I loved it, became more aware, safer, met some brilliant people and became an advocate for IAM RoadSmart.

Can I please thank David, Harry, Steve and Alan along with all the other volunteers at BRAM and Manchester500 – you are all superstars!